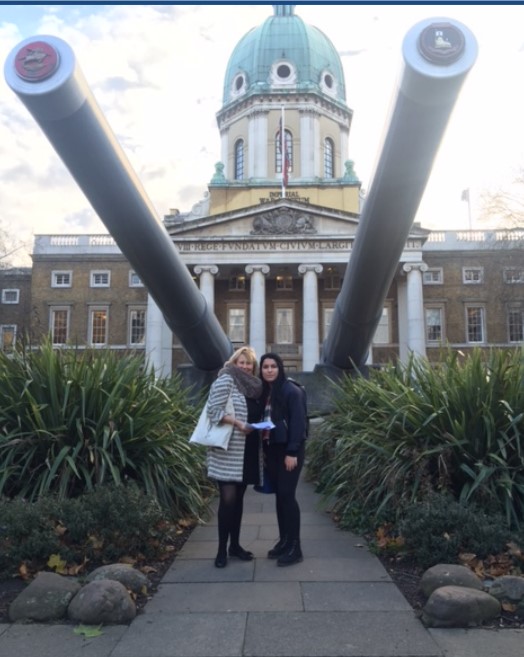 by Sanah Arshad, AS Student

After an unexpectedly peaceful trip on the Northern Line, the A level English Literature students, accompanied by Mrs. Poulton, arrived at the Imperial War Museum on a drizzly Wednesday afternoon just before Christmas. Having taken numerous selfies next to tanks, alongside guns and in military costume, the intrepid female army from LBC explored the WW1 galleries, discovering more about the conditions which inspired the literature studied in our classes. This trip really helped develop our understanding of the ‘wartime experience’ at this significant moment, considering that one hundred years ago, the Great War was underway.

“I am the enemy you killed, my friend.
I knew you in this dark:for so you frowned
Yesterday through me as you jabbed and killed.
I parried;but my hands were loath and cold.
Let us sleep now. . . .”

from Strange Meeting by Wilfred Owen

The First World War was a war of innovation. Advances in weaponry and military technology provoked tactical changes in each side’s approach to combat and military strategy Film shows, re-creations and exhibits heightened our awareness of the “pity of war.” Seeing the cumbersome gas masks on display really enabled us to make sense of Owen’s “fitting the clumsy helmets just in time” and the art works, exploring the war from above and below, showed us that conflict leads to creativity in painting as well as in poetry. We returned to the Northern line both sadder and wiser, appreciating the masterpieces of literature
which WW1 engendered but deploring the atrocities to which it led.