No stage too big for LBC Business students at BASE CHALLENGE 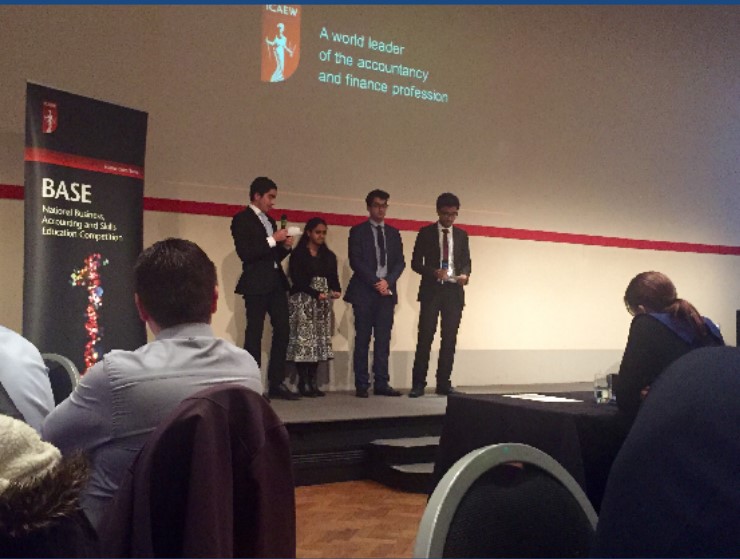 A team of AS Economics students participated in a Business and Accounting Challenge in Moorgate, organised by the prestigious Institute of Chartered Accountants in England and Wales. The team was faced with an extremely difficult business challenge which involved analysing and evaluating a lengthy case study, which is used in the third year of the chartered accountancy course!

The LBC team tackled the tasks exceptionally well and delivered an outstanding presentation in front of a panel of judges made up of accountancy professionals. Well done to Sruthi, Kazim, Arya and Sharif for participating and doing a fantastic job at representing the college! You were all magnificent! -Mrs Welkhu

Our group of four, along with our Business teacher, Mrs Kirit, travelled over to Moorgate to participate in an annual Economics and Accounting competition known as the ‘Base Challenge.’ Our team, as well as twelve other groups from schools and colleges around London, was assigned an incredibly complex and difficult case study. Its premise was fairly simple; ‘Should the Company take this Offer?’ What made it difficult was the overwhelming number of factors and variables. Perhaps the company shouldn’t take the deal so it doesn’t compromise its ethics? Maybe they should accept the proposal to allow for overseas expansion? But wouldn’t this potentially dilute the quality of the service?! Unfortunately, Mrs Kirit’s expansive knowledge was unavailable to us due to competition rules. We were instead provided with a mentor who was (almost) as well versed as our tutor. Once our team, with assistance from our mentor, had finished analysing the case study within the short time allotted, we needed to convert our conclusion into a coherent presentation for the panel of judges.

The one thing that the whole group could agree on is that the presentation was incredibly nerve-wracking. Not only were there at least one hundred people watching, but the judges were also barraging the teams with questions! Despite knowing what we were facing, we steeled our nerves and went up and gave
our presentation almost flawlessly, as witnessed by Mrs Kirit who was only just allowed to re-enter. In spite of our best efforts, however, our team was unable to come out on top of the rest and qualify for the next level of the competition. While there were no real ranks announced, our group and our mentor agreed that we had most likely earned ourselves a very respectable third place. Not an unsatisfactory outcome. Despite not winning, the whole Base Challenge experience was certainly one worth attending. The combination of time constraints, teamwork and atmosphere gave a realistic insight into what some accountants and business consultants might face on a regular basis. We would like to give especially large thanks to Mrs Kirit for giving us the opportunity to attend such a
fantastic event.

“To me, business isn’t about wearing suits or pleasing stockholders.
It’s about being true to yourself, your ideas and focusing on the essentials.”